How Often Should I Sharpen My Skates? 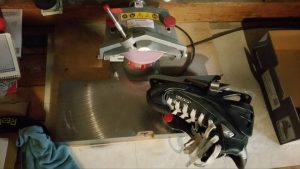 A question that many of us hockey players ask is when is it time to sharpen our skates. Most of us go 3 month without sharpening because it’s just too inconvenient to get one. That means our skates are so dull we have to mentally force our legs to push into the ice causing faster fatigue and taking away from our focus on the game.

Regular sharpening is important to maintain the blades of the skate as well. It removes any light rust that forms on the runner’s bottoms and sides. It also helps to maintain the edges keeping nicks from becoming impossibly deep. Most importantly it restores the edges that allow skaters to propel themselves on the ice. Still the question of how often to sharpen skates is a common one.

More experienced players will notice as the edge on their skates starts to fade. But then if you knew that, you probably wouldn’t be reading this article, right? The general rule of thumb is every five to ten games. Some players sharpen their skates every game. To those players, I will be the first to say thank you very much. However, the practice is a little excessive and even wasteful. Unless you’ve stepped on something, you should be able to get several games from a sharpening.

Over-sharpening your skates doesn’t just cost extra money on the sharpening price—it wastes your steel runners. You should be able to get about 150 sharpenings out of your stainless steel runners. That’s 3 years of use sharpening once a week. I will let you do the math for more or less often. Replacement runners cost between $40 and $60 a pair.

Not all sharpenings are equal though. A less experienced sharpening shop could easily halve the total number of sharpenings. Some questionable sharpening methods might make this number even lower with established practices that are questionable in their very nature. Regardless, sharpening more often than required is a waste of money.

On the other hand sharpening less often than required is going to greatly reduce your enjoyment of the game. If you’re waiting until skates are so dull that you’re falling down, you’ve robbed yourself of the enjoyment you should have had that day. It’s akin to getting new tires on your car after you’ve had an accident or blowout. Now that doesn’t make much sense, does it?

Need a fresh edge? Just give us a call to schedule an appointment for a skate sharpening.